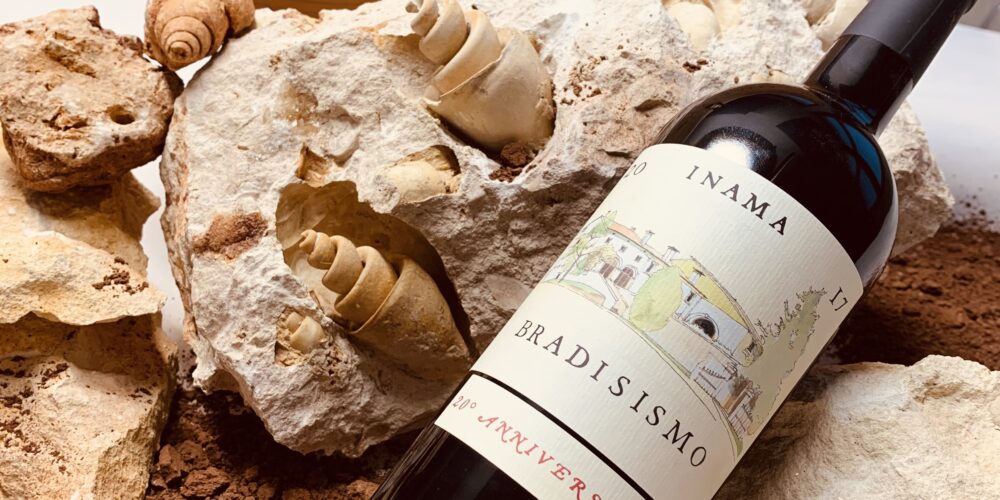 It is a wine that has become synonymous with constant research and with a producer that has never stopped strenuously studying the potential of its terroir, creating – in so doing – a pioneering vision of red wines from the Veneto. Bradisismo – the result of a moment of inspiration – has now taken on a change of pace after 20 years of experimentation. It’s the beginning of a new chapter.

«During the last ten years, we have worked hard to create a great team in the vineyard and in the winery, investing in human resources as well as in improving our viticulture and vinification processes. Now we are all working together and the 2017 Bradisismo celebrates this development with a special watercolor on the label»
– say Matteo, Alessio and Luca Inama, the new generation that has taken over the reins of running the company alongside their father Stefano.

This wine is also the first to avail itself entirely of the cooperation with the company of world-famous consultant Stéphane Derenoncourt, known globally as one of the finest interpreters of the terroirs of Bordeaux – and more. Behind this new collaboration there is the philosophy that the Inama family shares with the influential French enologist, as Stéphane says: «The wine is the direct expression of the clays». The vision and philosophy of Stefano and Stéphane perfectly match. «The wines must convey the distinctive characteristics of the place in which the grapes are cultivated».
Only by means of sensory analysis of the skins can one distinguish the territorial notes caused by the different clays present in the vineyard and highlight them in the vinification.

So that is what lies behind the 2017 Bradisismo. Its story began in 1997, the year in which the first vintage of Bradisismo was produced: this wine was named after the geological event that generated the area of Colli Berici.

The wine is a blend based on Cabernet Sauvignon (as from this year, it is a Cabernet Colli Berici D.O.C.), characterized though by the presence of Carmenere, which makes it distinctive and intimately linked with the story of this variety in the Veneto region.
The vineyards are cultivated according to sustainable farming practices, with low yields of around 40 hectoliters per hectare.
The wine matures in barriques – new ones, in a small proportion
– for about 15 months.