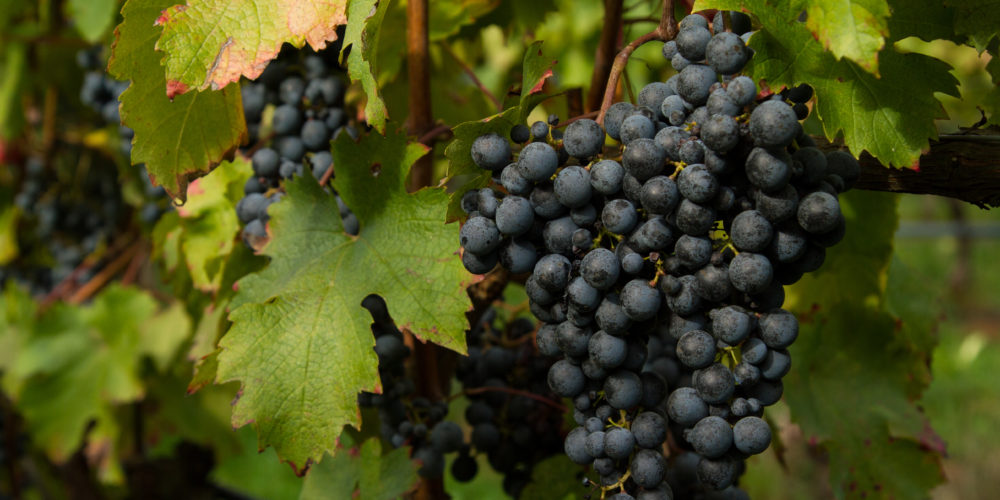 Carmenere is a variety that is often considered unique to Chile. However, few people know that Carmenere has been widely planted in Italy for a long time, and that in 2009 the DOC Carmenere Colli Berici (in the province of Vicenza) was recognized. It is in fact in the beautiful hills of this region that the Carmenere grape variety has found the ideal place in which to reach full ripeness. This allows Carmenere to develop its most precious aromas, including spices and black pepper, overcoming notes of green pepper that are often considered typical of this variety (especially in Chile). Once again, the Italian territory is able to surprise, offering ideal conditions for growing Carmenere in the Berici Hills.

But how did Carmenere arrive in northeastern Italy?

Carmenere has a fascinating, original history.

It’s a vine that originated on the Dalmation Coast and spread throughout the Roman Empire in ancient times. This variety was grown especially in the Bordeaux region, and was long used in the typical blends of the area. However, due to its low productivity and difficulty of reaching full maturity (especially in an Atlantic climate like that of Bordeaux), Carmenere was not replanted after the phylloxera epidemic that struck Europe around the middle of the nineteenth century. This grape was considered extinct for a long time, until, only in 1994, DNA testing confirmed the opposite. It was discovered that Carmenere had traveled across the world, hiding in history. To the great surprise of scholars and growers, this vine was found widespread in Chile (where it had been confused with Merlot) and in the north-eastern regions of Italy.

In the second half of the 19th century, Carmenere was probably brought to the Italian area by travelers (there were in fact many who went to France for the harvest season). It was identified in some places under the name of Black Bordeaux or Old Cabernet and often mistaken for a degenerated and weaker form of Cabernet Franc. As a result, in the Veneto and Friuli regions, where it is quite common, this variety became for ampelographs, scholars and growers the prototype of the Cabernet Franc. At the time, in fact, the diversities between Carmenere and Cabernet Franc  were attributed to variations in clones and, for propagation purposes, they were divided (incorrectly) into a French-type Cabernet Franc and an Italian-type Cabernet Franc, which would later prove to be Carmenere. But what distinguished Carmenere from Cabernet was its larger and sparser clusters, growth, low fertility, aroma and more intense color of its grapes (Ampélographie Universelle by P. Odart, 1849).

During the 1960s, Prof. Antonio Calò and Prof. Carmine Liuni studied what was known as Cabernet Franc in the Veneto region, comparing it with imported French  collections of Cabernet Franc cultivated in that country and the differences between the two varieties began to emerge. It was the ampelographic studies and, above all, modern chemical analysis of the grapes and wine performed between 1988 and 1991 at the Istituto Sperimentale di Viticoltura in Susegana by professors Calò, Di Stefano and Costacurta, that brought to light enough diversities as to lead to the belief that the French and Italian clones were probably two different varieties. Confirmation of this discovery came with the entry of Carmenere into the register of vine varieties, resolving any doubts and opening the way for this new wine of which northeast Italy is now the cradle of its cultivation.

The idea of producing a great and unique red wine, typical of the Berici Hills, made from a selection of Carmenere grapes, came to mind when we first saw the area around the old Oratorio di San Lorenzo at San Germano dei Berici (province of Vicenza). This was back in 2001. It is a small valley, probably of Karst origin, halfway up the hills on the right-hand side of Val Liona. Actually, in our opinion, it is exactly here, on the Berici Hills just south of Vicenza, geologically formed by an ancient bradyseism, that Carmenere has found its ideal area.

The territory seems to have been shaped to help this so difficult grape to ripen. The earth is red, rich in iron oxide and on calcareous stone. The climate is milder than the surrounding areas. The vineyard Oratorio di San Lorenzo, in the village of Villa del Ferro  – lat. = 45.392488 long. = 11.461403 -, is marked to the west by a steep woody hill that feeds it with red silt washed down by the rain. In the Summer, the area is extremely hot during the day but cool in the evening because of the air that comes down from the wood to the vineyard.

We believe that a new era for Carmenere has begun.